Profit for the period

The 2017 results highlight Poste Italiane’s strategic role in Italy’s development and the Company’s ability to generate profits, provide quality services to customers and at the same time create value for shareholders, employees and all our stakeholders.

These results reassure us about our ability to face the profound social, environmental and economic changes that are transforming the environment in which we operate, including a radical digital transformation, the continuing backdrop of globalisation, new demographic trends and lifestyles, and climate change.

In early 2018 we drew up the new Deliver 2022 Strategic Plan, which sets out a plan for the Group’s development in line with market needs. This includes a focus on professional development and the nurturing of talent, whilst committing to an investment programme of approximately €2.8 billion over the period of the Plan, centred on digital development, automation and reorganisation of the service model for retail, business and Public Administration customers.

We have completed a reorganisation of our operating segments, in order to improve the visibility and transparency of the main value drivers for each segment. A part of this process is the creation of the new Payments, Mobile and Digital segment, with the aim of centralising the management of payment services, which will also be extended to include the activities envisaged by the new European Payment Services Directive (PSD2).

We pay great attention to the sustainability of its activities in the awareness that it covers a strategic role in the development of the country and in reaching general sustainable development goals. This commitment translates into adopting and promoting values and conduct being attentive to the needs and expectations of stakeholders: integrity, transparency and a sense of responsibility and reliability steer our internal relations as well as relations with the outside world, generating trust and credibility in our work.

In line with Sustainable Development Goals, we intend to develop our own sustainability targets in order to integrate elements of sustainability in corporate policies, processes and long-term strategy up to a definition of a Group Sustainability Plan.

There are currently several activities put in place by the Company for its active participation in the construction and implementation of a local and global sustainable development model that focuses on the following main areas:

REDUCTION OF THE ENVIRONMENTAL IMPACT OF THE BUILDINGS

by means of promoting digitalisation, accessibility to products and services and secure information, also in collaboration with local players (entities, institutions, associations and Third Sector) with a view to active promotion of the principles of proximity and social cohesion.

operating in observance of the principle of no discrimination and equal opportunities, of health, safety and growth in intellectual capital.

ETHICS AND CORRECTNESS IN RUNNING THE BUSINESS

The operating segments, and especially Mail, Parcels and Distribution, are supported by two distribution channels for retail customers, on the one hand, and business and Public Administration customers, on the other. These channels operate alongside a series of corporate functions responsible for policy, governance, controls and the provision of services supporting business processes.

The organisational model, which ensures the development of synergies within the Group as part of an integrated approach to operations, is applied via governance and operating models, characterised by:

The performance in 2017 has enabled the Group to achieve consolidated operating profit of €1,123 million, registering growth of 7.9% compared with the previous year (€1,041 million). This was primarily due to the positive contribution to the result from the Insurance Services segment.

CONSOLIDATED STATEMENT OF PROFIT AND LOSS

The Group’s total revenue amounts to €10.6 billion and is broadly in line with the previous year (down 0.1%).

Non-current assets total €3,077 million, marking an increase of €210 million compared with the end of 2016. This primarily reflects acquisition of the investment in FSIA Investimenti Srl, partially offset by the negative effect of the movements in non-current assets (capital expenditure of €467 million, offset by depreciation, amortisation and impairments of €545 million).

The Poste Italiane Group’s capital expenditure amounted to €467 million in 2017 (up €16 million or 3.5% on 2016) and was designed to support achievement of the objectives in the “Deliver 2022” Strategic Plan. Most expenditure is focused on Mail, Parcels and Distribution services, where the upgrade of the Group’s technological resources and its logistics network continued, with a view to boosting overall sorting capacity and responding to the growth in volumes driven by e-commerce, as well as to improving the quality of service provided. The process of renewing the hardware used in post offices and the evolution and enhancement of the applications used in supplying services also continued. 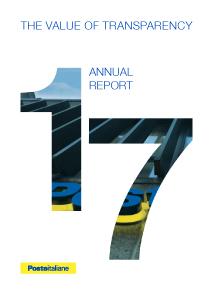